If you have just been diagnosed with Hepatitis C, Please, do NOT Panic! I have had Hepatitis C since 1967/68 and I’m still here and feeling pretty good most of the time.  Sometimes I can feel downright suicidal, its hell on my wife and kids.

Hepatitis C is something you will probably die with, NOT from. Unless of course, one of the treatments available (Rebetron, Peg Intron, Pegylated Interferon with Ribavirin) works for you. 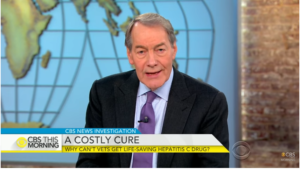 Hepatitis C virus (HCV) infection is a major health problem worldwide. About 100 million to 150 million people are infected, including approximately 5 million to 6 million in western Europe and 4 million to 5 million in the United States. (Estimates can be as high as 15 Million Americans.)

Approximately 60 to 70 percent of those infected have chronic hepatitis, and 15 to 20 percent have cirrhosis, which may evolve into hepatocellular carcinoma.
Although disease caused by HCV infection progresses slowly and usually takes more than 20 to 30 years to develop into clinically overt liver disease, the number of cases is expected to increase sharply during the next decade.
In the Western world, HCV infection is the most common cause of liver disease and the main indication for liver transplantation necessitated by end-stage liver disease.

Of every 100 persons infected with Hepatitis C (HCV) about:

75 to 85 persons may develop long-term infection

Following the identification of hepatitis A and hepatitis B, this disorder (Hepatitis C) was categorized in 1974 as “non-A, non-B hepatitis.” In 1989, the hepatitis C virus was identified and found to account for the majority of those patients with non-A, non-B hepatitis. In March 1997, the National Institutes of Health (NIH) held a Consensus Development Conference regarding management and treatment of HCV infection. This led to an important, widely distributed NIH Consensus Statement that, for several years, defined the standard of care. Now 5 years later, (2002) knowledge of hepatitis C has increased dramatically, leading to the need to reexamine the approaches to management and treatment.

HCV is an RNA virus of the Flaviviridae family. There are 6 HCV genotypes and more than 50 subtypes.

The identification of the Hepatitis C Virus (HCV) in 1989 through the use of molecular-biology techniques was an enormous step forward. Still, many issues remain unresolved. An efficient tissue-culture system, which would allow in vitro testing of new and better antiviral compounds, is still lacking.
A better treatment for chronic Hepatitis C (HCV) infection is urgently needed, since only about 40 % of patients have a response to combination therapy with interferon and ribavirin.
A vaccine that would prevent and thus stop the spread of the disease is not on the horizon.

“Despite knowledge of HCV for more than a decade, there has been little progress in the development of a vaccine. The obstacles to development of a vaccine against this virus are many. There are no robust tissue culture systems for propagation of HCV and no simple neutralization assays or small animal models for the infection. Recently, a replicon system of HCV has been developed that uses a chimeric subgenomic replicon consisting of the HCV internal ribosomal entry site and the nonstructural regions of the genome fused with a selection gene and a potent promoter. This HCV replicon replicates at moderately high levels in cell culture but does not produce intact virions or an infectious particle. Nevertheless, this system does allow for the study of replication of HCV and provides a means of rapid screening of antiviral agents.

Small animal models have been developed for HCV, including chimeric animals with transplanted human hepatocytes. These animal models have yet to be used widely. Other obstacles to vaccine development are the qualities of HCV, its marked heterogeneity (suggesting that vaccines will need to be developed for several genotypes), as well as the poor antibody responses to recombinant HCV antigens in humans. Most difficult, however, is the finding that immunity to HCV is not complete and that reinfection can occur after recovery from infection, either as a result of exposure to different strains or even to the identical strain. These findings indicate that development of an HCV vaccine will require fundamental breakthroughs in immunology and vaccine development. For the present, however, control of hepatitis C will require public health measures and perhaps treatment of infectious individuals.”
[End Quote]

The latest news appears to look promising for us.

Antiviral drugs are not licensed for persons under 18 years of age. Children with hepatitis C should be referred to a children’s specialist in liver diseases. You may want to ask your doctor about clinical trials that may be on-going for children.

A small percentage of persons with chronic hepatitis C develop medical conditions outside the liver (this is called extrahepatic). These conditions are thought to occur due to the body’s natural immune system fighting against itself. Such conditions include: glomerulonephritis, essential mixed cryoglobulinemia, porphyria cutanea tarda, rheumatoid symptoms, keratoconjuncitivitis sicca (dry eyes/mouth) and lichen planus.

Liver biopsy yields information on fibrosis and histology assessment that is not obtainable by other means. Radiologic imaging (ultrasound, MRI, etc.) is not reliable in diagnosing cirrhosis.

As you may have guessed by now, interferon alpha and ribavirin were not developed to treat chronic hepatitis C specifically. They are non-specific agents that have many effects on the immune system and against several viruses. It is in fact remarkable that they work as well as they do (approximately 40-50% success rate) in the treatment of hepatitis C. Unfortunately, they are also associated with many side effects.

With so many challenges, it should not come as a surprise that an enormous amount has been written on the subject of the Hepatitis C Virus (HCV). In the first nine months of the year 2000, 1437 new references were indexed in Medline, nearly three times as many as those devoted to colon cancer and nearly as many as the references on lung cancer.

It is our sincerest desire to provide for you the very latest information on Hepatitis C and all related medical issues. Here you will also find information on how to deal with the Veteran’s Administration, Insurance, Doctors and points of contact to assist you further. We do not seek so much to be a carbon copy, cut and paste website; rather we choose and, therefore, strive to be, an online community for all.