The history of controlled laboratory research on interactions of human consciousness with physical random systems tracks the development of microelectronics and computers. The first large database experiments were conducted by Helmut Schmidt, at Boeing Laboratories, in the late ’60s and early ’70s. The number of experiments and investigators grew over the next decade, and in 1979, Robert Jahn, at Princeton University, established the Princeton Engineering Anomalies Research (PEAR) laboratory to focus on an engineering approach to the question whether sensitive electronic devices including random components might be affected by special states of consciousness, including strong emotions and directed intention. I joined the PEAR group in 1980. 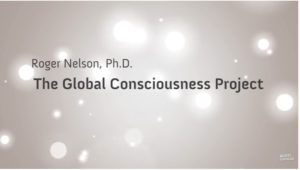 At the PEAR lab, the primary experiment used a custom designed Random Event Generator (REG or RNG) incorporating a well-developed commercial source of electronic white noise. This bench-top experiment provided control over parameters such as the speed and size of the samples drawn from the random sequence of bits. For example it might be set to collect a 200 bit sample at a rate of 1000 bits per second, and to register a trial each second consisting of the sum of the 200 bits. The equipment displayed the current output trial value and a running mean as feedback to the operator. The experiment used a tripolar protocol, with instructions to maintain an intention to achieve either a high or a low mean, or to let the machine generate baseline data. Over more than a decade this basic experiment yielded an enormous database, with a bottom line indicating a small but significant effect of human intention on a random data sequences. A paper describing 12 years of research (pdf) at PEAR, using several different mind-machine interaction experiments, is available.

My job at PEAR was to coordinate the research, focusing on experimental design and analysis. Attention was given immediately to computerizing the REG experiment for security and ease of data processing, and to allow greater flexibility in experimental design. An early proposal was to record a continuously running random data stream, and to use that as a target for intention with a variety of timing and assignment schemes. Such a system was finally developed in the early 1990’s, when John Bradish built the first of a series of truly portable REG devices, and York Dobyns wrote software to record and index a continuous datastream of 200-bit trials, one per second, hour after hour and day after day. The “continuous REG” was used as a direct focus for some experiments, with intentions identified in the index, but we also could mark and later analyse data collected while something else was going on in the room — another experiment, or perhaps a small, intense meeting or group discussion.

Given portable REG devices and newly available laptop computers, we were inspired to take the experiment into the field, running a modified version of the continuous software called FieldREG. The name was a double entendre, since the purpose of the experiment was to monitor something that might be regarded as a consciousness field. The FieldREG experiment did not have an intention, and indeed could be used to gather data in situations with little or no direct interest or attention from people. We looked for situations that might produce a “group consciousness” because people would be engaged in a common focus, resulting in a kind of coherence or resonance of thoughts and emotions. For contrast, we identified other, mundane situations we could predict would not bring people to a shared focus. A long series of FieldREG experiments produced striking, statistically significant results. As in the laboratory, the effects are small, but they have implications of substantial importance to studies of human consciousness, assuming the results represent what we believe they do.  This can impact those living with infectious illnesses like HIV and Hepatitis C, we just didn’t know the power of this concept at that time.